Low-code and no-code development increase the speed and efficiency of application development by minimising  or eliminating the amount of code that must be hand-written. This is achieved through large-scale code reuse, collaboration between developers and business users, and citizen development.

Writing code by hand is slow, error-prone and requires extensive testing and debugging. Professional developers are expensive, difficult to find, or both. Low-code and no-code development products allow you to maximise the value of your software developers by enabling them to create applications more efficiently and more quickly. This is particularly relevant for mobile and tablet apps, which often need to be developed at a very fast pace. Accordingly, many products in the space offer sophisticated mobile and tablet capabilities.

Low-code and no-code also enable business users to create applications themselves by working with the functionality created by your developers. By enabling self-service and reducing dependence on IT, you allow your citizen developers to rapidly create applications that provide the functionality that they need right now. Furthermore, this is a collaborative process, and by engaging in it you foster a mutually beneficial relationship between IT and the rest of the business.

In addition, many organisations face difficulties with compliance and security due to the prevalence of shadow IT: programming functionality, such as automated spreadsheets and Excel macros, that is created without approval and remains unmanaged and ungoverned by IT and the organisation as a whole. Although there is a similar danger with self-service app creation, many low and no-code vendors are acutely aware of this problem and are actively working against it. Moreover, by enabling rapid, self-service app creation you remove the biggest motivation for shadow IT, and many products in the space aim to leverage this to either reduce the prevalence of shadow IT or replace it entirely. 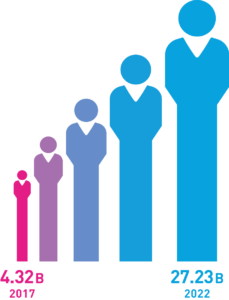 Low-code and no-code development products aim to minimise or eliminate the amount of hand-written code needed during application development. Their methods vary, but in general they achieve this by facilitating reuse on a large scale. Many products adopt a model wherein developers create functionality – either coding it from scratch or importing it from an existing system – in self-contained blocks called ‘components’. These components can then be distributed throughout your organisation and used to build applications by either your developers or business users, along with a (usually large) variety of pre-built components available out of the box. This is usually done via drag-and-drop onto a canvas or a flowchart. In addition, mobile and tablet capabilities are almost always provided out-of-the-box. Sometimes this involves additional development time – usually to create an appropriate mobile view – but often it is entirely automatic.

Much of this process is often easy and non-technical, intended to allow business users to create applications without prior software development experience. This is often known as ‘citizen development’. The end result is that building a bespoke application is more and more a collaborative process between the business and IT. Several vendors have noticed this and offer additional capabilities to support collaboration. Moreover, it’s common for vendors to provide a marketplace to either upload (and possibly monetise) your own components, or download components created by other organisations.

First and foremost, you should care about low-code and no-code development because of the improvements to speed and efficiency they afford. This means that you can develop apps much more quickly, which may offer a significant advantage. This is particularly true for organisations seeking to build mobile apps, or work within an Agile environment. What’s more, the degree of improvement offered by low and no code is enormous. For example, Forrester Research found that one leading product in the space added, on average, over 4 million dollars of business value to their customers due to decreased development time alone (ignoring additional value provided by, for example, no longer needing to hire additional developers). This was due to a 60-85% reduction in development time that reduced the average time taken to develop an app by 8 weeks, combined with a 96% reduction in maintenance and update costs. Overall, the product was found to provide a 260% return on investment. A competing product proved even more successful, delivering over 12 million dollars of business value per year over a three-year period.

“A module that was expected to take 2 weeks now took 1 day from the start of the design to the finished product.” Nokia

“We reduced our development hours by 75 percent and got to market 3x faster.” FICO

“Business and IT are pleased with the way we’re working together, but also the speed at which we realize value. I could say it’s 20x faster.” Enexis

Which low-code or no-code product you decide to implement should in large part depend on the degree to which you would like your business users to be involved in the development process, and the extent to which you would like to support citizen development. Although there are products in the space which are suitable for any approach, we generally favour more collaboration (as well as more self-service) over less. However, there is no denying that this can cause issues with security and compliance that must be addressed. If you are worried about compliance and security, it may be worth investing in products – such as those found in the data governance space – that address them specifically. If you’re particularly interested in eliminating shadow IT, it may even be worth investing in spreadsheet management, on the basis that you need to find and eliminate any existing ungoverned spreadsheets before replacing them with self-service apps.

If you want to maximise efficiency during development, your developers are the obvious place to look. Depending on your solution, they may still be expected to write code (albeit a vastly smaller amount). In this case, investing in developer tools, such as advanced IDEs, may be of use if they are not already provided by whichever low or no-code product you are using. Otherwise, perhaps the best way to increase efficiency is to examine your testing capability: even a lightning-fast development cycle can be bogged down if your testing is sluggish. If this is the case, consider investing in a test automation and/or continuous testing solution.

Low and no-code development allow you to develop applications unprecedentedly quickly and efficiently while enabling citizen development, collaboration and self-service.

The Grocers are coming!

The Chaos Factory by Adam Wasserman

Is Zoho an exemplar for a new breed of 21st century technology company...

How I learned to stop worrying and love low-code

Why No Code rather than Low Code

Low-code solutions and the problem of citizen developers