Eric Herzog, Violin’s Chief Marketing Officer and SVP of Business Development, told me “Concerto 7000 is our biggest announcement ever”. So what makes this announcement so significant, given that quite a few vendors now offer all-flash storage arrays with good management features?

First of all, Violin had slipped a little behind the curve in management tools in 2013, so it lost market share; this release fully addresses this. Then it has upped the maximum raw capacity to 280 terabytes (TB) within a single namespace across 4x70TB shelves.

Yet it is equally about the timing alongside the shrinking cost of flash (NAND flash in this case), as the the overall package becomes ever more attractive to enterprises. In four years the typical cost of a MB of flash has reduced from perhaps $70 to below $10 list price. Then factor in dramatic savings in rack-space, power and cooling along with, typically, a 5–10x application acceleration—and the economics of using disk-based primary storage can begin to look flaky.

Herzog cited one global bank that was currently reducing its data centres from 38 to 10, with an 85% saving in rack-space (as Violin uses one rack for a capacity where 10 were previously needed), a 93% reduction in annual power costs, and an overall 71% server and storage saving—for an estimated four-year saving of over $2.5bn.

A huge performance boost is also expected with all-flash primary storage and cache, partly because of reduced latency and I-O wait-state—with parallel simultaneous memory reads (partly a function of how the data is spread across the memory modules). Herzog mentioned another client who had reduced the processing time for its mission-critical billing application by 76% by making this switch.

If a question-mark remains over reliability, this too is reducing. Herzog said Violin guarantees five 9s performance and provides a three-year memory warranty. 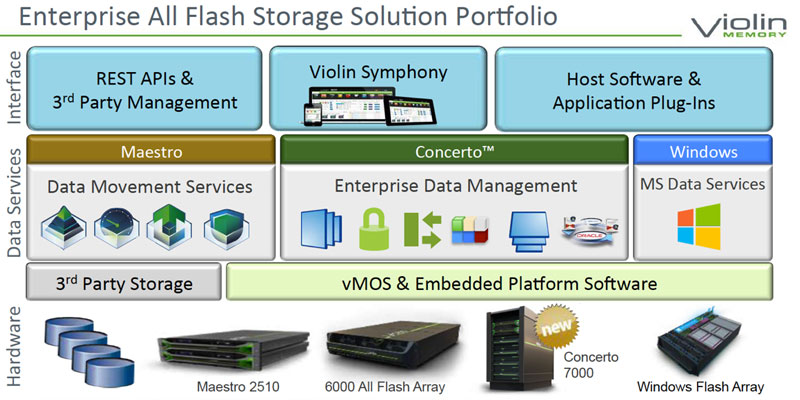 For data efficiency there is thin provisioning and thin clones but not quite ready are in-line compression and de-duplication for tier-1 data (promised for later this summer).

All in all, this should return Violin Memory to the forefront of all-flash systems just in time to cash in on a rapid ramp-up of Enterprises looking for tier-1 disk-based system replacements.

Yet Herzog pointed ahead to an inevitable challenge from large vendors such as IBM, HP, EMC and Hitachi. These, he said, were right now behind technically and still had a big investment in disk, but they might use bundling deals to hold on to clients. A few weeks ago, Violin lost a large deal because EMC gave all the flash away for free, he said. (It is also likely that these big vendors are right now considering their takeover options to help catch up, with most still to make such a move.)

The many existing Concerto 6000 users are catered for as existing 6000 arrays can be made storage shelves behind the new Concerto 7000 controller. They can also add the new Concerto data services via a Fibre Channel (FC) or iSCSI upgrade kit including two servers, cables, software (and extra switches for more than two shelves). So Concerto 6000s (which have capacities of 6.5-70TB) will continue to be sold. Violin Memory’s new data set should bring it back into tune with the market.

This content has been filed under our Agile Storage technology page. If you would like to know more about this subject, please click on the links below:

What Agile Storage means to your business:

Educational resources to help you learn about Agile Storage.