It’s that time of year and the IBM Think Conference – Think 2020 – has come around again. Of course, because of COVID-19, it’s an online conference this year. That’s a pity, because although IBM has done its best do support an online UX (User Experience), the value of a conference is often finding out what you didn’t know you needed to know, from chance meeting in a coffee break. Despite “best efforts” with social media, this sort of serendipity is hard to arrange online.

No matter, IBM has already told me about some interesting announcements at Think 2020. With my Dev. and Gov. hat on, I was particularly interested in its OpenShift hybrid cloud ecosystem story, resulting from its Red Hat acquisition last year. IBM is committed to being Cloud agnostic (good) and everything it has does, or will, run on the OpenShift hybrid cloud, enterprise Kubernetes application platform. Moreover, it is actively expanding the Red Hat Marketplace to supply reusable cloud agnostic components, for building new applications through “orchestration” of high-level components, instead of building them from scratch with code. And this works because of the ubiquitous OpenShift abstraction platform, which can run everywhere from the data centre, to multiple public clouds, to the edge.

What this means is, for example, that a developer who knows nothing about the mainframe (perhaps doesn’t even know that her organisation has one) can go into the marketplace and just pick up and use a component exploiting high performance hardware encryption on Z for her app. Possibly running on a mainframe service outside of her organisation. And this is facilitated by everything running on Open Shift.

The devil, of course is in the detail. Even if an app is written to be cloud-agnostic, some clouds will be more appropriate for specific workloads and IBM seems well aware of this. Its Cloud Paks – pre-integrated, containerised, middleware and development and management software services on top of a common integration layer – are an interesting development and, along with Red Hat Marketplace, it is delivering a cloud ecosystem that is more than just technology (although it is still playing catchup with the Salesforce AppExchange marketplace, I think). Marketplaces are becoming essential to delivering Cloud technology, because they deliver a degree of vendor independence and the whole becomes greater than the sum of its parts.

IBM is actively encouraging the movement of mission critical workloads onto suitable public clouds using what it calls Intelligent – cognitive – Workflows, facilitated with its Garage methodology for “transformational change with the speed of a startup at the scale of an enterprise”. It is promoting smarter business based not only on Bits (conventional IT) but also on Neurones (AI – augmented intelligence – which is only just starting, in reality, but progressing fast) and Qubits (Quantum Computing – which is only applicable to a subset of “hard” problems but will revolutionise automation where it can be used). 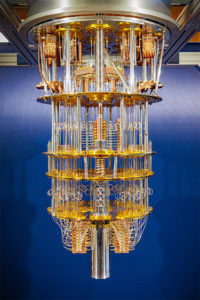 Quantum computing has currently the status of magic in much of the press. Why do I take it seriously from IBM? Well, partly because I have seen an IBM quantum computer, albeit one with not quite enough Qubits yet, accessible on the Web but largely I take IBM’s future predictions seriously because I take IBM Research seriously. IBM has delivered real, Nobel-prize-winning fundamental research (such as the scanning tunnelling microscope) and such fundamentally practical ideas as Relational Databases (the mathematical foundations of which were developed by Ted Codd at IBM). Its multiple patents are often to do with more than just tweaking known technology in new ways, more than just a PR exercise – if we’d never had IBM Research me might never have had some of the fundamental knowledge the world depends on (well, not as soon, anyway).

So, what are the specific announcements at Think 2020, then? According to Denis Kennelly, general manager, IBM Hybrid Cloud. “IBM is helping clients unlock the full potential of edge computing and 5G with hybrid multi-cloud offerings that bring together Red Hat OpenShift and our industry expertise to address enterprise needs in a way no other company can”.

Edge Computing is about distributing data storage and computation out to the edge of the cloud, near to where it is being used (thus reducing network communication overheads and avoiding the impact of time delays – latency – on UX). It is important for, amongst other things, integrating IOT devices into holistic business automation; and is facilitated by 5G communications (because of the low latency and lower overheads of 5G rather than just its increased speed).  We are now getting several new edge-supporting initiatives from IBM:

IBM can already point to many participants in its ecosystems (such as Cisco, Dell, Samsung and so on) and can point to businesses already collaborating with IBM (such as Samsung and Vodafone Business) on 5G and Edge use-cases.

But are there any negatives to all this? Not many that I can see, at this stage, although the ultimate success of a marketplace is whether it really takes off, comes alive, and this is not something IBM is in sole control of. I note the pervasive focus on AI and that has implications, of course, particularly in the area of “explaining its workings”, but IBM tells me: “explainability is extremely important, David, and often expressed by our executives and in our marketing. Explainability 360 and Watson OpenScale are indications of how high a priority this is in our platform”. I also note that Blockchain distributed ledger technology (please don’t confuse this with Bitcoin) seems to be important to IBM and I still have trouble convincing myself that it doesn’t have fundamental scalability and latency issues –  what if one node becomes disconnected for a time and the blockchain can’t synchronise, for example – but IBM seems confident that its blockchain technology meets requirements (and 5G connectivity might help when – if – it become ubiquitous). IBM tells me that its enterprise blockchain technology can already cope with around 10k transactions per second and that “On latency, some of that depends on the deployment model and the underlying physics; we are able to manage that effectively based on the use case by designing the right deployment model”. That’s probably OK then.

So, IBM Think 2020. It should be interesting, and I like what IBM, after recent changes, is saying. Now I just have to join the conference online.

This content has been filed under our Action Automation technology page. If you would like to know more about this subject, please click on the links below:

What Action Automation means to your business:

Educational resources to help you learn about Action Automation.