I have been following what used to be Ingres since I was at NCR in the early 1980s and we started reselling the Ingres database. And then, of course, for more than 25 years I have been an analyst tracking the product’s fortunes as it has moved through various other hands (most recently HCL), accumulating companion products on the way. There is one thing that has been consistent over the years: it can’t market its way out of a paper bag. Every time there is a new ownership or a new management team they tell me things are going to get better and every time it doesn’t.

Today, I attended – I say that very loosely – the company’s hybrid data conference. My main interest, for the agenda was very technical, which I will come back to, was to have a meeting with Jeff Veis, the CMO. This was scheduled for midday. I duly arrived at two minutes to twelve to be told that he would be delayed for a few minutes. When there was no further sign of him the best part of half an hour later, and with no further information, I walked out. Given that it took me two and half hours to get there in the first place, not to mention the costs thereof, you can imagine that I was not a happy bunny. However, this pretty much sums Actian up. A party in a brewery? No chance.

But it isn’t just my experience. Consider the agenda: highly technical and clearly aimed at the existing user community rather than the broader market. If Actian (HCL) truly believed in marketing itself, and thought it could attract new users, it would be exhibiting at, for example, Big Data London.

Of course, it may be that the company simply doesn’t value analysts, though if that’s the case I don’t know why they reached out to me in the first place. In any case, it would belie the results of research carried out by CIO Watercooler – see below – about what’s important in buying decisions. Though, of course, surveys and statistics won’t change anyone’s mind once they’re convinced they’re right. 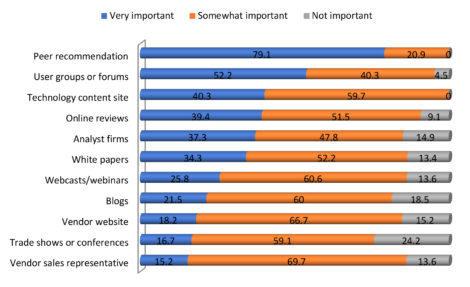 Anyway, the bottom line is that Actian is still as hopeless as it has always been. It may (does) have good technology but you wouldn’t know it and they seem determined not to tell anybody about it, including me.

This content has been filed under our Data Warehousing technology page. If you would like to know more about this subject, please click on the links below:

What Data Warehousing means to your business:

Educational resources to help you learn about Data Warehousing.